My dad knew he had a book that his Air Force friend Bill gave him when the two were leaving the base where they had become friends. In this book is the most thoughtful inscription. I typed it up because it's hard to read these pictures, and I wanted to keep the words in memory of William H. Zahrndt, my dad's friend. 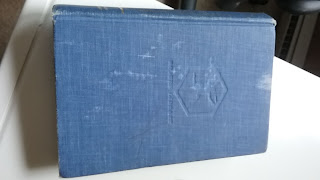 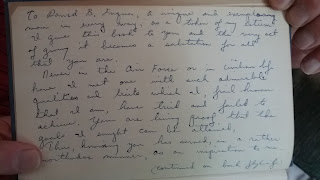 To David B. Fuqua, a unique and exemplary man in every way, as a token of my esteem, I give this book to you and the very act of giving it becomes a salutation for all that you are.

Never in the Air Force or in civilian life have I met one with such admirable qualities and traits which I, frail human that I am, have tried and failed to achieve. You are living proof that the goals I sought can be attained.

Thus, knowing you has served, in a rather unorthodox manner, as an inspiration to me.

(continued on back flyleaf) 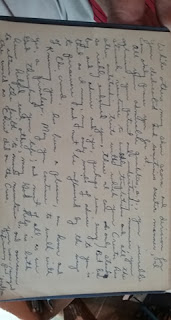 While some may show scorn or derision for your dedicated and sometimes ascetic manner, I can only praise you for it.

All your admirable qualities, e.g., your incurable optimism, your patient and understanding manner,  your staunch resistance to worldly temptations and all the other outstanding traits with which your Creator has so richly endowed you, these I can only stand by and admire and, yes, perhaps even envy. But be that as it may, my only words of advice to you is to persevere and not be influenced by the ways of the crowd.

Knowing you has been a pleasure, an honor and yes, a privilege. May you continue to walk with God throughout your life; and most of all, as we have helped each other, may God help us both to attain the faith "to move mountains" and overcome the world as Christ did on the Cross.

Your war-ravaged
life-weary pal,
William
Posted by Susanne at 4:10 PM