Rethinking Cain and Abel: Technology vs. Nature; Role of Religion

Notes and Reflections on Noah's Other Son, by Brian Arthur Brown -- see introductory post for more information on this book Chapter 2 is about Cain and Abel or Qabeel and Habeel if you prefer the Quranic names.  Here is a bit of what the author had to say about these brothers and what they represent. 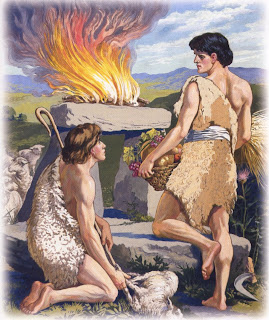 "Abel is an ancient word for 'shepherd,' though it can also mean 'breath.' ... [He] represents the era in human history when humanity developed beyond hunting and gathering food.The era of animal husbandry is the first era of civilization." On the other hand Cain, meaning 'smith' as in blacksmith represents someone who "made tools that would actually interfere with nature." You know like putting up fences to keep out Abel's animals or trying to force plants to grow in rows, using animal waste as fertilizer and manufactured instruments to break up the soil.   The author notes that "primitive religious folk" believe Abel's offering was accepted by God because "compared to the more natural life of Abel, the shepherd breathing freely out under the stars, Cain was seen as positively decadent in lifestyle and activity, much the way we feel about farmers using herbicides and pesticides, or the possible curse of genetically modified foods."  (pg. 40) Mr. Brown notes that both Cain and Abel had a God consciousness "which was one of the finest human instincts from the beginning." It is rather interesting to learn about more remote tribes and realize the people in those lands also have gods and ways to worship and please their deities. It seems a rather universal trait to have some awareness of higher beings out there running things.  Do you suppose it's because people long for an explanation of why things happen - why a torrential rain would flood their land and wreak havoc?  why a swarm of locust would ruin the crops? why the sun would do its job and cause things to grow?  I wonder if it's only (or mostly) in more civilized societies where technology reigns where we find people denying the existence of a god controlling at least a few things out there. The author credits Seth as introducing 'organized religion' based on the last part of Genesis 4 which reads:   25 Adam lay with his wife again, and she gave birth to a son and named him Seth, saying, "God has granted me another child in place of Abel, since Cain killed him." 26 Seth also had a son, and he named him Enosh.       At that time men began to call on  the name of the LORD. Brown believes the role of religion "in addition to offering warnings in the name of God [for such things as global warming, materialism, militarism], is to provide the protection that God offered Cain in a world where risks must be taken, technological or otherwise. Preachers are not to encourage turning back the clock at every juncture, but rather to offer encouragement and wise reflection on the trends, guiding progress instead of preventing it." (pg. 43) Then he takes about a page to explain that mainstream Christian churches are declining, but perhaps this is what civilization needs as Christianity becomes more cultural.  He even says some historic churches may be called to become 'shrines'  as centers of cultural religion.  Instead of meeting in churches, he says "serving God in the community and in the world is the new agenda."  Now I'm curious..if you were brought up hearing the story of Cain and Abel, what explanation were you given for why God accepted Abel's offering and not Cain's?  What do you think of the author's interpretation of this story?  Do you think he shows technology in an unfair light or is he pretty balanced in his thinking that people are often resistant to change ... perhaps even God because He accepted Abel's offering and not Cain's.  Note: the author did make mention that Cain threw himself upon God's mercy after being judged for killing his brother.  Thoughts?
Posted by Susanne at 2:13 PM

I was never actually given an explanation for why God accepted Abel's offering and not Cain's. It was just one of those things. God did it, end of story! :p

Hmm...I recall reading somewhere an explanation that was almost the opposite of this authors. That Abel represented the farming, settled existence and Cain represented the wilder, hunter/gatherer existence which is why God accepted Abel's sacrifice and not Cains. Because Abel was the future, the more prosperous and better way, and Cain was the old, out dated way. Metaphorically at least.

And the Quran does mention 2 sons of Adam sacrifcing to God and that only one was accepted but doesn't mention any other details.So the way I understand is that one brother killed the other because he was envious that God rejected his sacrifice but accepted his brother's.His anger overwhelmed him.

The scenario was just like in a game where normally there's only one winner.That doesn't mean the loser has fallen short of God's favour.

One version I read said that one gave animal offering which God accepted,while the other gave agricultural one.Perhaps this story was the main idea behind amimal sacrifice?

"..made tools that would actually interfere with nature.."

But animals are born with 'ready-made' tools unlike man.Man's only ready-made tools is his brain! this is how he survives. So how can this be not natural? He's not born with protective gear to shelter from harsh weather etc or maybe we've evolved so much that our natural protective gears have all disappeared?! I'm curious.

I like his take on Seth! That had not occurred to me before but I think that it makes sense. I also like the Quranic versions of the names better, just because they match and it seems to make the story smoother.

I was taught as a kid that Abel gave the firstfruits of his work, the best he could give, and that Cain gave the least attractive or useful portion. The professor for my Genesis class didn't seem to agree with that theory and said that there's nothing in the text that necessarily leads us to that conclusion, but he didn't give us a definite alternate explanation either. A friend of mine gives an answer something like this one, arguing that settling down and creating cities destroys the world and that we should all go back to hunter/gatherer society, only taking what we need. He backed it up in a paper with a lot of archaeological and sociological findings, saying that people then are believed to have had more free time and been happier and healthier, and that a lot of our worries and stresses today come from technology and civilization. I think there's probably something to that but also would point out that our hunter/gatherer ancestors had a lot more worries as far as predators and effects of weather. There are consequences on either side.

I don't think we necessarily get an answer for why. On the other hand, what does it mean that God favored Abel's offering? It never really says what the consequences of that are, never says that Abel was rewarded or that Cain was punished. Couldn't Cain simply have imagined that God wasn't happy with him? Or maybe God really did like Abel and his offering more, but simply because he did and not necessarily because Cain did anything wrong that bothered God or that he was criticized for? The point of the story doesn't seem to be on God's reaction to the offerings, but Cain's reaction to what he perceived. I think it might be a mistake to focus on what caused God's reaction, since his favor is only a plot device here and not actually given as anything we can understand and learn from. We're supposed to learn from Cain's actions after the offering, not before, or we would be told more about what happened before.

Amber, that's interesting that you read the opposite! This guy seems to have a thing against too much "progress." Hehehehe. Well, he seems nice, I guess. ;)

Thanks for what you added. :)

Lat, thanks for letting me know those names do not appear in the Quran. I wasn't clear on that prior to your comment.

You've got the basics of the story that I know as well. I'm glad you shared what you knew of the Cain and Abel story. Also, I agree with you about our brains - figuring out things - is our best "tool." I don't think we are unwise to use it to progress in life.

I really appreciate what you added!

Sanil, I have never noticed that about Seth and the people then calling on the name of the Lord until the author made mentioned of it. Then I had to go look up the passage and see for myself. Glad you liked that.

Well, Cain and Abel don't rhyme so I think Qabeel and Habeel are too cutesy for my taste..hahaha. But I'm glad you prefer the Arabic ones. Now I'm curious what the Hebrew words are. OK, Wikipedia has this: Hevel, Qayin

Oh, this is interesting. Also from Wikipedia:

Though Genesis depicts Cain's motive in killing Abel as simply being one of jealousy concerning God's favor for Abel, this is not the view of many extra-biblical works. The Midrash and the Conflict of Adam and Eve with Satan both record that the real motive involved the desire of women. According to Midrashic tradition, Cain and Abel each had twin sisters, whom they were to marry. The Midrash records that Abel's promised wife was the more beautiful. Cain would not consent to this arrangement. Adam proposed to refer the question to God by means of a sacrifice. God rejected Cain's sacrifice, signifying His disapproval of his marriage with Aclima, and Cain slew his brother in a fit of jealousy.[38]

" I think there's probably something to that but also would point out that our hunter/gatherer ancestors had a lot more worries as far as predators and effects of weather. There are consequences on either side."


Yes, really good point. Of course there are different kinds of worries with technology, but I still prefer having some amenities in life than worrying about things they likely worried about in those days. I'm really glad you shared what you were always taught about the two sacrifices. It sounds very much like what I was taught! :)


You almost always bring such good things to mind...thought-provoking. Thank you so much for taking time to share what you did. I really enjoyed all that! :)