The Almost Nearly Perfect People: Behind the Myth of the Scandinavian Utopia by Michael Booth -- I had too many scattery notes so I posted them already

Jesus Freak: Feeding -- Healing -- Raising the Dead by Sara Miles -- a lovely book. I was touched by many things she wrote though I disagreed with a few things. Still, stuff like this makes me smile:


"Sure, it's impossible to feed five thousand people, make a deaf man hear, bring a dead girl to life, as long as you obey human rules.  So do it God's way instead, Jesus teaches. Say yes.  Jump right in. Come and see.  Embrace the wrong people. Don't idolize religion. Have mercy. Jesus' tips cast a light forward, steering us through the dark."  (pg. 3)

Little Pretty Things by Lori Rader-Day -- I saw this in the new books section and thought I'd give it a try even though I wasn't familiar with the author.  I rather liked it.  It's a story about Juliet, ten years after her high-school graduation, still in the same small town, working at a one-star motel, and her former best friend showing up at her workplace - and finding Maddy hanged the next morning right there on the hotel railing.  It's a mystery to be solved.

Prints Charming by Rebeca Seitz -- a light-reading book about friendship, scrapbooking, and finding true love just across the breezeway


A Night to Remember by Walter Lord -- not a light-reading book; an account of the night the Titanic hit an iceberg and sunk


How Sweet the Sound by Amy Sorrells -- a "coming-of-age tale, inspired by the story of Tamar," this book tells about life mostly from 13 year old Anniston's point of view.  It discusses family secrets and how they haunt people.

Death of a Dunwoody Matron by Patricia Sprinkle -- "a Southern mystery" which I really liked for the most part.  I like the main character's sense of humor, and this story about who killed off doll-like Yvonne - and why?


The Black Hour by Lori Rader-Day -- when Amelia Emmet returns to teaching after being shot by a college student, she gets a graduate assistant who is intrigued by her story, who wants to solve the mystery of why this student shot a teacher prior to killing himself.

The Secret's in the Sauce by Linda Evans Shepherd and Eva Marie Everson -- the first in The Potluck Catering Club series. It's not a new series, and I'd previously skipped over it at the library, but I was in the mood for some light reading.  This is the story of six women who start a catering service. Each chapter is written or told by one of the members. It was decent so I got the other two books at the library yesterday. Might as well.


A Taste of Fame by Linda Evans Shepherd and Eva Marie Everson -- book two in the series mentioned above; this time the ladies compete in a national reality show: catering for events in New York City


Bake Until Golden by Linda Evans Shepherd and Eva Marie Everson  -- the ladies are back home from New York, and when a murder occurs in their town, one of them is the prime suspect


Trouble the Water by Nicole Seitz -- a pretty good book to read while I was sitting on the beach listening to the waves during this super-mild December; partly because the title has "water" in it, and also because it takes place along the coast of South Carolina.  This is the story of Honor and her showing up at the home of Duchess, and how their lives intermingle. It's also the story of Alice reading her baby sister's story through letters as Honor wastes away from an aggressive form of cancer.

Did You Declare the Corpse? by Patricia Sprinkle -- When MacLaren goes on a trip to Scotland to explore her genealogical roots, she got more than she bargained for when two people - one from her group - wind up murdered.  I enjoyed learning a bit about Scotland's history and scenery from this book.


The Lovely Bones by Alice Sebold -- I got this at a book exchange awhile back. It's about a girl who was murdered by a neighbor who lured her into his secret hole in the ground.  All that was ever found of her body was an elbow.  And the story is told by Susie as she watches from her heaven. It's a bit weird.

Hiking Through by Paul Stutzman -- "One man's journey to peace and freedom on the Appalachian Trail" ; I like AT stories quite a lot.  Andrew and I have hiked very small parts of areas mentioned in the book so it's always fun to think of those places when you hear authors mention them.  This book had a lot more God talk than other AT books.  We actually heard of this book from a lady in Damascus, Virginia, back in May when she was greeting thru-hikers with trail magic (e.g. candy bars) as they came into the town.  I got the book off my wishlist for Christmas and finished it quickly so it would be my last finished book of the year!

I wanted to post the books I received for Christmas this year. Some are from my Amazon Wishlist while others were chosen for me. 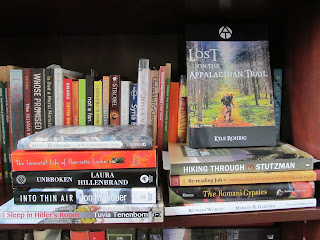 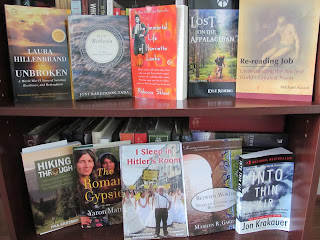 The Almost Nearly Perfect People: Behind the Myth of the Scandinavian Utopia by Michael Booth -- I heard about this book while reading the comments of one of Bridget's blog posts, and decided it might be worth checking out.  Thankfully my library had it, and I finally remembered to look for it. It was good!  Well, I tend to enjoy learning about other countries and cultures, and this was one region I'd not read too much about.  Sure, I see these Nordic countries often mentioned in the news.  The Danes are so happy and people leave their babies outside in their buggies while the parents eat inside!  And no one steals them!   The Norwegians are so rich!  The Swedes so welcoming of immigrants!  Bridget has piqued my interest in Finland since her family moved there a few months ago.  Iceland, well, they just have ice there, right?  I swear I woke up Andrew when we went over Iceland one year because I was able to see it down below from our plane. Is that possible or did I dream that?  I was so excited. He was so...not excited that I woke him from a nap.  Planes are tough for us to sleep on!

I learned so many neat tidbits from this book.   Like the Danes are super-trusting and trustworthy. If you try leaving wallets behind for an experiment on how many of the wallets will be returned intact, you will be run down by Danes AS YOU "DROP" THEM so the experiment is tough to do.  Also, lawyers aren't needed as much due to this trustworthiness.  Agree on something and shake on it.

I was surprised to learn that Danes have high cancer rates and poor health (pg. 34).  I think they smoke and drink a lot.

According to this author:


90% of Danes have approximately the same standard of living (pg. 30)

pig farming and pork butchering is big there (pg. 26)

Danes are sociable and outgoing; and they love community choirs and joining clubs (pg. 38)

They love their flag and will hoist that thing even to celebrate birthdays.  (pg. 96)

A few bits about Icelanders. More of them believe in elves than believe in God. (pg. 136)

I guess I didn't note much about them. Sorry, Icelanders.

Norway -- lovely scenery, rich because of oil; somewhat lazier, but with plenty of public money due to oil, even the outer places of the country have good infrastructure and are inhabited (not everyone lives in the major cities)

Swedes peel bananas in Norway because some jobs are too lowly for people rich with oil wealth (pg. 183)

Finland -- they like sitting naked in the sauna in silence - DO NOT TALK TO THEM THERE!
low verbosity; they like being alone (pg. 220+)

Swedish people were told to describe their compatriots.  "The top adjectives they chose, in descending order of relevance, were: envious, stiff, industrious, nature-loving, quiet, honest, dishonest, and xenophobic.   The bottom three (out of thirty) characteristics, i.e., those least exhibited by the Swedes were: masculine, sexy, and artistic."  (pg. 285)


Something mentioned about many of the countries, if not all....a lot of the people just don't like talking to strangers.  The author tried engaging them in conversation and in some countries it was just horrible to the natives.  The author mentioned Nordic people not having to talk to fellow countrymen because they were so much alike, they already knew what the other was thinking!  He termed it a "high-context society."   Weird and a bit boring if you ask me.    (pg. 286)

He mentioned Swedish rudeness - barging on trains (I must admit that this surprised me!), their totalitarianism, individualism, modernism (no church for us, thanks...too traditional), feminism (don't you dare open a door for a lady, you freak!), independence (from family, not the state)  (pgs. 327-335)