Mina by Jonatha Ceely -- I read book 2 before book 1 (this book) so I knew how the story ended with Mina in America, but I didn't know the backstory except for what was alluded to in book 2. Which was actually quite a lot of it, but still it was good reading this one. I enjoyed this book.

With You Always by Jody Hedlund -- Sisters Elise, Marianne, and Sophie are struggling to survive in New York City and gain employment at a mission house. When economic problems arise, they lose their livelihood. As the eldest, Elise travels to central Illinois to work in a new town that Thornton Quincy is trying to establish along the railroad line.  This is book 1 in the Orphan Train series.  Mostly predictable, but an easy read, and an OK, decent story.

A Heart Revealed by Josi S. Kilpack -- Amber is the Rage of the (London) Season until a health issue brings humiliation and a change in address: she's pretty much banished to her family's small cottage in northern England.  As she and her loyal maid-turned-friend Suzanne live so far from London, they learn to survive without a household of staff and the life of privilege.  A pretty good story.

Heart on the Line by Karen Witemeyer -- I read two of her books previously and wrote that they were merely ok, but this one I rather liked.  It wasn't super by any means, but I liked it better than the others for some reason.  Grace and Amos are telegraph operators who talk after hours over the wire. When Grace is threatened, Amos travels to her town and they meet face-to-face for the first time.  Pretty good book.

Walking to Listen by Andrew Forsthoefel --  "4,000 miles across America, one story at a time" ; Andrew leaves his home in Pennsylvania with a sign on his backpack "Walking to Listen." He heads south and I love some of the stories he shares especially from Virginia and later from Alabama.  Also good was when he was on the Navajo and Hopi reservations out west and the people were so kind to him.

If Only by Richard Paul Evans -- an easy read, and a sweet book about Eric, a ninth grader who recently moved from California to Utah. While at work one night, Eric finds a girl looking in the Dumpster for food.  He takes her to the clubhouse on his family's property where she hides out for several weeks.  A cute story.

The Bright Side of Disaster by Katherine Center -- This, I believe, is the fourth book I've read by this author, and I could tell within the first bit what would happen as far as men go.  Not that other books and authors aren't predictable, but hers really stand out.  Main Character is living with a guy who turns out to be a loser (or Looozah as Sophie would say) so she ends up with some other guy who comes on the scene who for real is Mr. Perfect. But how each Main Character gets to that point in each of her books is pretty good.  In this book Jenny is pregnant and when Looozah Fiancé leaves her, she does the whole single parenting thing alone. And it is tough.  A decent book; not my favorite of hers.

Circle of Three by Patricia Gaffney -- One of those three-generations-of-women books.  Grandma Dana (70ish), Mom Carrie (42), and Daughter Ruth (15) who struggle through life's changes.  A decent book.

The Inheritance of Loss by Kiran Desai -- I got this at a Little Free Library, and I really do not know what all it was about. Indians and other nationalities in India?  And Indian young men in the US?  I didn't like it.

The Outcasts by Kathleen Kent -- I'd read one other book by this author so I figured why not read this one? It alternates between Lucinda's story as an epileptic whore escaping the brothel with a mission to locate information about gold on a small island somewhere in Texas and Nate's story as a Texas lawman who teams up with a couple of Rangers to locate an outlaw.  Despite how it sounds here, it was a halfway decent book, I guess.

The Season of Second Chances by Diane Meier -- After holding herself aloof from relationships most all of her forty eight years, Joy leaves her professorship in NYC for one in Amherst, Massachusetts. There she makes friends and helps people out, and learns more about herself in the process.  An OK book.

The Preacher's Bride by Jody Hedlund -- Elizabeth works for Pastor John Costin's family as a housekeeper after the death of his first wife. Vicious rumors are spread about her and the reverend. Should he marry her or another in this Puritan community in order to squelch the talk? This was an OK book.

Force of Nature by Jane Harper -- A corporation chose 5 men and 5 women for a bonding retreat in the Australian bushland. The two teams head out with their supplies and a map, but the women fail to make it to camp the second night.  Tempers flare, injuries abound, and when the group finally emerges hours after the scheduled time, only 4 of the women walk out of the woods. Alice is missing, but what happened to her?  I found this book by chance at a local library (but not the one nearest me) and I enjoyed this mystery and have put the author's other book on hold.

Life's a Beach by Claire Cook -- A light, easy read for when the kids were visiting. Ginger Walsh is 41 and living in the apartment above her parents' garage when her mom decides to put the house on the market. Ginger tries to figure out her life: a job, take a higher commitment with her boyfriend and all that stuff. An OK book. Cute, but nothing special.

Rebellious Heart by Jody Hedlund -- Massachusetts while the US was still a colony of England. Susanna Smith's loyalty to her king is tested when a British soldier oversteps his authority. An OK book.

The Dream Daughter by Diane Chamberlain -- the library got another book by this author, and this one was different, but interesting especially if you don't mind a little time travel between 1970 and the 2000s.  Hunter shows up in 1970 with a broken ankle after falling from the roof of a building. Some say he is suicidal, but in reality, he just landed in 1970 after being part of 2018, and he fell off the building he landed on! Weird. But the book is pretty good.

Posted by Susanne at 5:17 PM No comments:

Sophie is visiting the area now, and today she was at my house for a couple of hours.  She had a great time playing with Tucky, and when he left to help with youth group at church, Sophie and I went to the park which is near my house.

When we first got there, Sophie and I had the whole place to ourselves so we entertained ourselves by doing the scavenger hunt.

We have to locate the apple, frog, star, clock, carrot, and so forth. Ten items in all. Or "awwb jects" as Sophie drawls it.  Objects, if you don't understand Southern. 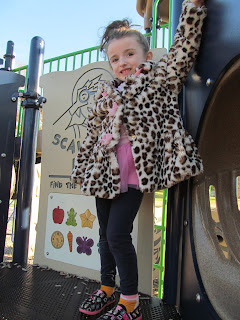 She loves when she finds the objects first. 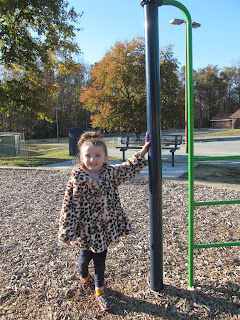 About twenty minutes after we got to the park, people started arriving and - yippee! - Sophie had not one, but TWO little girls just a bit older than her to play with.

I had been walking up and down a hill in order to redeem the time and get a little exercise. It's a favorite hill to roll down - or, at least, both Sophie and Zach have rolled down this hill in times gone by.

Sophie asked if they could, and I said I could not give permission for Jillian and Carla since I'm not their guardian/parent. But eventually all three girls rolled down the hill.

Here are a few pictures I took of Sophie in the process. 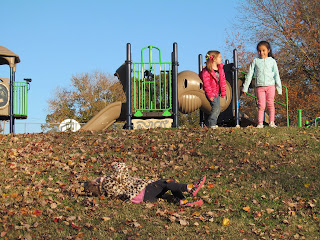 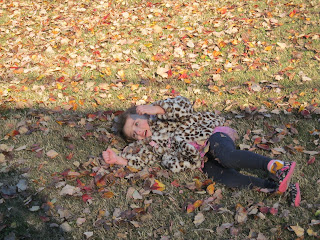 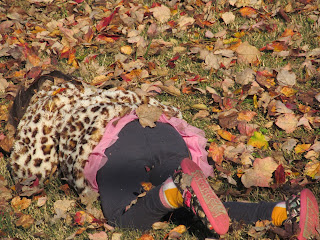 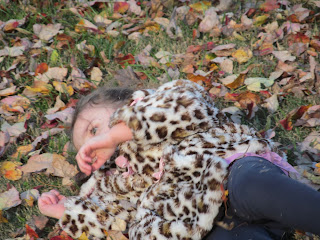 And finally I had her stop so I could show her her leafy hair! 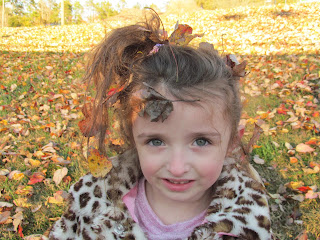 Toy Bonnie and Cinderella made the paper!

Zach and Sophie's grandmother - they call her Nana - sent us this picture via text last evening.  The kids were included in the local county paper, The News-Record & Sentinel, while wearing their Halloween costumes.

The caption should really have an "at" in place of that first "and" to be accurate and "Freddie" should be "Freddy's," but possibly the caption writer was like me about FNaF stuff.

Lifetouch gave me a coupon for a free digital download since I made a purchase on their online site today. Actually they said it was because I signed up for their rewards program.

I wanted to have a copy of this here. 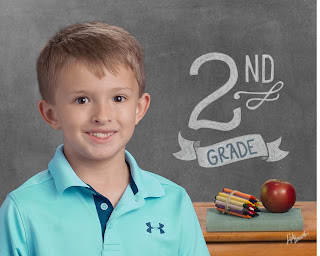 Posted by Susanne at 5:06 PM No comments: