Blessing by Deborah Bedford -- a book I found in Damascus, Virginia, at a Little Free Library a few months ago. I had it on hand to possibly eventually read when I didn't have a library book checked out, and last week was that time! The kids were in town visiting for Thanksgiving and I just decided to read this one instead of browsing the library shelves for better selections. I say all that because this book was sweet, but nothing special. Uley foils the plot of a would-be murderer (so she thinks) and Aaron Brown is sent to jail to await his trial and probable hanging.

Come and Find Me by Hallie Ephron -- I like these novels of suspense by this author, and this one was good even though part of it took place in a virtual reality world. Diana deals with panic attacks and rarely leaves her house so she meets people through her online "game" and office as Nadia. She does eventually leave her house when her sister goes missing. A pretty good story!

The It Girls by Karen Harper -- a story featuring the Sutherland sisters, Elinor Glyn, a novelist, and Lucile Duff Gordon, a fashion designer. Pretty interesting!

The Dressmaker's Gift by Fiona Valpy -- an interesting story about three seamstresses in Paris, Claire, Mireille, and Vivienne, who meet where they work during World War II. Two generations later, Claire's granddaughter Harriet is in Paris trying to find out more about her grandmother and the two ladies pictured with her in an old photograph Harriet finds.  Pretty good story.

Eleanor Oliphant Is Completely Fine by Gail Honeyman -- the other day I asked my Facebook friends about favorite books they read in 2019, and Niki recommended this one which I saw was available at my local library. I enjoyed this story about Eleanor and her coworker Raymond especially seeing life situations and people through Eleanor's eyes. Cute story.

The Woman Who Walked in Sunshine by Alexander McCall Smith -- Mma Ramotswe is reluctantly persuaded to take a holiday, but she finds herself drawn into the detective business.

The Woman in the Window by A.J. Finn -- Anna Fox is scared to go outside, but has built a community for herself online in the Agora platform and with a few professionals. Also she loves using the zoom on her camera to spy on the neighbors. When a new family comes to town Anna gets to know Ethan, the slightly-awkward but seemingly kind teenager, who has a controlling father, Alistair. A suspenseful book.

Belonging: A German Reckons with History and Home by Nora Krug -- this graphic memoir (Andrew saw me reading this and asked if I were reading a comic book) was an interesting way to learn more about the author's German family and more about the Nazis and Jews

Keep Quiet by Lisa Scottoline -- I've read many of this author's books from the DiNunzio series, but this is a stand-alone novel about a dad and his sixteen year old son who make a fatal mistake when Jake allows Ryan to drive a short distance home one night.  A pretty good story.

The Nightingale by Kristin Hannah -- I've had this on my TO READ list for a couple years now as my friend Niki highly-recommended it. When I asked FB for favorite books, she mentioned it again so I decided to finally order it from the library.  Two sisters - Vianne and Isabelle - struggle in France during the German occupation and rule of their country. Vianne stays at the family farm with her daughter Sophie where they await their husband/father.  A German solider billets at their house - fun times. Isabelle, meanwhile, heads to Paris where she gets involved in secretive missions.  Great story!

Meg & Jo by Virginia Kantra -- "a contemporary retelling of Little Women;" if you like modern versions of classic literature then you might enjoy this book. It was just OK to me.

You'll Never Know, Dear by Hallie Ephron -- Lis and her mother, Miss Sorrel, work to solve a family mystery after a very-damaged portrait doll looking like Lis's long lost sister is brought to Miss Sorrel's doll-repair shop in answer to an ad Miss Sorrel runs in the paper every year on the anniversary of her daughter's disappearance.  A pretty good book.

Searching for Sylvie Lee by Jean Kwok -- Amy travels to the Netherlands to search for her older sister who went to visit their grandmother before her death. Now Sylvie Lee is nowhere to be found. Pretty good story!

Will My Cat Eat My Eyeballs by Caitlin Doughty -- "big questions from tiny mortals about death;" this was a pretty interesting way to learn more about death by hearing what children have asked the author. So, do you think your cat would eat your eyeballs?

Look Again by Lisa Scottoline -- While bringing in her mail, Ellen is startled by how much her son looks like a young child on one of those "Have you seen this child?" inserts, and she can't get it out of her head. The reporter in her wants to follow up, but what if her legally-adopted child was kidnapped?

The Emerald Mile by Kevin Fedarko -- Andrew requested this book so I ordered it off Amazon since the library didn't have it. It's "the epic story of the fastest ride in history through the heart of the Grand Canyon," and Andrew, having formerly been a white water rafting guide in West Virginia, really appreciated this more than I. But I still was amazed by much of it even if some aspects were over my non-river-rafting-lingo head. Also, Andrew wants to raft down this river (the Colorado) one day, and after reading this, I'm like "why?" and "are you nuts?"

From Here to Eternity by Caitlin Doughty -- I got this book for Christmas from Amber, and in it, the author is "traveling the world to find the good death." I enjoyed her tales from other countries such as Bolivia and Mexico and Japan as well as a few stops in the US like Cullowhee, North Carolina!  A good book to end the year, right?
Posted by Susanne at 8:32 PM No comments:

I was sorting a few things at my parents' house today and saw these old pictures from an album. I thought I'd post them here.


My grandfather with five of his children: Ann, Henry, David, Jean, and Dorothy. The date on the picture says January 1957. 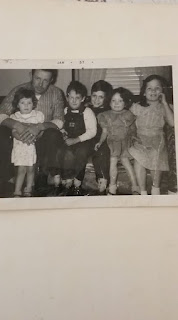 My dad and his brothers around 1961:  (I wish it were easy for me to rotate pictures here as it is on Facebook): 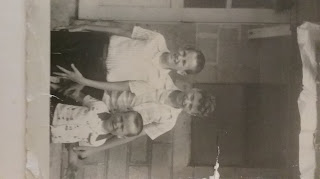