The Girl Who Came Home by Hazel Gaynor -- I enjoyed this novel about the Titanic, and a group of 14 from a village in Ireland who traveled together.  It explores some of their stories, especially Maggie Murphy, the 17 year old orphan who was traveling to start a new life with her Aunt Kathleen. A touching book.

Mist of the Midnight by Sandra Byrd -- First book in the Daughters of Hampshire series; an interesting story about Rebecca Ravenshaw's return to England after 20 years in India.  After her parents are killed, Rebecca returns home with hopes of reclaiming her ancestral house.  Instead she finds a distant cousin, Captain Luke Whitfield, is settling in, and a tale about another Rebecca Ravenshaw who already showed up, claimed the house, and died not too long ago - what?!  I liked this book.

Jude by Kate Morgenroth -- After Jude witnesses his father's murder (he was selling drugs, and cutting the supply so...), he is introduced to his mother, a local district attorney!   His life changes drastically...and this book was rather troubling.

The Coincidence of Coconut Cake by Amy E. Reichert -- Lou runs a French-cuisine restaurant in Milwaukee.  Usually everything runs smoothly and she and her staff make delicious food.  But on one of the worst days of her life, the local food critic drops by, is served terrible food, and writes a scathing review.  Meanwhile Al Waters meets Lou who gives him - an Englishman new to the area - tours of famous Milwaukee things to do.  A rather cute book; an easy read.

Bride of a Distant Isle by Sandra Byrd -- Second book in the Daughters of Hampshire series; Throughout her life, Annabel Ashton has battled the rumor of her mother giving birth to her out-of-wedlock (in an era where this really really matters) and the fact that her mother died in an insane asylum.  Is she also going mad? Will she also end up dying young in an asylum?   Her cousin Edward inherited everything, but their expenses have increased so much that he asks her to sweet talk (essentially) the Maltese captain Marco Antonio Dell'Acqua in order to gain Dell'Acqua's business.  And so forth...

The Secret Keeper by Sandra Byrd -- This is "a novel of Kateryn Parr," the last wife of King Henry VIII. It follows the story of one of Kate's ladies, Juliana St. John.  It was a good way to learn more about the queen and king and England at that time.  It took me awhile to get into this book because of all the names and titled people, and the fact that I wasn't fully focused due to both Sophie and Florence (hurricane coming to my state) visiting.

Alena by Rachel Pastan -- I read this whole book hoping to find out the name of the main character, but I did not!  She's referred to as the curator or "she" the non-Alena...ugh. So, she gets a curator job at an art museum on Cape Cod. But she lives in the shadow of the late, Russian-born Alena who disappeared one night two years ago, and was thought to have drowned.  This book was OK, but ultimately unfulfilling since I never found out the Curator's name. Maybe it's in there, and I just missed it.  *shrug*

The Death of Mrs. Westaway by Ruth Ware -- After her mother died in a hit-and-run accident 3 years ago, Hal (short for Harriet) struggles to pay the bills and gets taken by a loan shark. When a letter arrives from a lawyer saying that her grandmother died and left her something, Hal is hopeful that some of her money woes will be relieved. But the grandmother mentioned in the letter is not the same lady mentioned as her grandmother on her birth certificate.  Can Harriet dupe this super-rich family out of a few thousand pounds in order to pay off the people threatening her?  I enjoyed this book; suspenseful!

Miss Wilton's Waltz by Josi S. Kilpack -- a decent, easy read; Lenora is rather a wallflower compared to her younger sister, Cassie. When Lenora's fiancé dumps her for her sister, Lenora finds she's not heartbroken (she didn't really love him), but is embarrassed at local gossip about her.   Her aunt offers her a home in Bath, and Lenora shines as a music teacher at a school for girls.  When 12 year old Catherine comes to the school, Lenora finds this troublesome girl brings more challenges into her life than anticipated!

The Heretic's Daughter by Kathleen Kent -- A story about Martha Carrier, who was hanged as a witch during the Salem witch trials, as told through the eyes of her 10 year old daughter, Sarah.  A pretty interesting way to learn more about this time in history.

The World Made Straight by Ron Rash -- A story out of Madison County, NC.  While out fishing, Travis stumbles upon some marijuana growing and takes it to a local seller. I know, I know...what a book. Well, it gets some better, and was actually somewhat interesting. Travis ends up living with this dope seller, Leonard, a former teacher, who encourages Travis to get his GED.   I actually saw a book or two by this author in gift shops along 441 (between Cherokee and Gatlinburg). That's what prompted me to look at what books the library offered (quite a few) so I may read more from him at some point.

Thieving Forest by Martha Conway -- I got this from my Amazon Wishlist, a birthday gift, I believe, and I enjoyed this story about Susanna and her sisters who live in west Ohio during the days of the settlers and Indians. This story takes places just after Susanna and her sisters are orphaned, and a tribe of Indians kidnap most of them.  Susanna was feeding the pig - Saul - so she saw it all happen.  The story follows her search for them, and the sisters' lives among the natives.  Pretty interesting story!

Serena by Ron Rash -- This book made me so very very thankful for those who lobbied, purchased, donated to make national parks a reality!  Because Serena and Pemberton are just ruthless. And although this book is fiction, I was never so glad someone was unable to have children.  (THIS is actually the book mentioned above that I saw in mountain area gift shops.)

The Bird Sisters by Rebecca Rasmussen -- Milly and Twiss (Theresa Wis, in case you were wondering; Wis for Wisconsin because as a baby she put black Wisconsin dirt in her mouth; her dad gave her dirt as a newborn) are 70-something, never-married sisters who live together on the old family land.  This story flashes back to their growing-up years, the summer when their cousin Bett came to stay, the year their father had the Accident which lead to his loss of career and his living in the barn.  It was a good book with interesting characters.

The Life Intended by Kristin Harmel -- I really enjoyed this book about Kate, a music therapist who works with children.  It was an interesting way to learn more about music therapy, American Sign Language, and foster children. Good book.

Everyone Is Beautiful by Katherine Center -- a cute book and very easy read about Lanie and Peter's move from Houston to Massachusetts so Peter can do something with his musical composition work.  Lanie tries to wrestle their three young boys while making friends and getting into shape.

Posted by Susanne at 6:16 PM No comments:

Not so Italian after all: DNA updates from Ancestry

Just over two years ago, I spit into a tube and mailed my saliva to somewhere in the USA so my DNA could be analyzed.  I realized much of this was a lark and not definite, but it was something I had friends doing, something I was interested in doing, so I did it!

I posted about my results in August 2016, and now it's time for an update.

Why?  My friend posted her updated DNA results the other day and said Ancestry had emailed her about their thousands of new samples and new science which changed some of the findings.

Some trace regions were eliminated, some broad groups were better refined.  I actually was not super-shocked when my highest original 35% Europe South (Greece/Italy) was dropped to 18% Refined to Italy.  Italy is still surprising to me so you can imagine a 35% would be, and was.

I thought my dad's total would drop as well since HE is the one I got that high percentage from. But his 47% Europe South (Greece/Italy) changed to 47% Italy and 5% Greece and the Balkans!

So, I'm not sure what to make of that.  Mine dropped significantly as my DNA became much more English all of a sudden ... and his did not.  (Well, it kind of did, but not the Europe South part.  See his updated results below.)

See why I take this as not totally true and more for entertainment purposes?

Here are our updates as of earlier this week:  (Click pictures to view larger; they are the updated results)

Since my sister controls her son's test, his results are pictured differently so I copied his original here to make it easier to compare.  I think his switch from 35% Iberian Peninsula which was his top one to 37% France being the top is odd.  His dad is Venezuelan so the Iberian Peninsula didn't shock me.  France is actually what I expected more from my parents since Fuqua and Truax are purportedly French surnames. 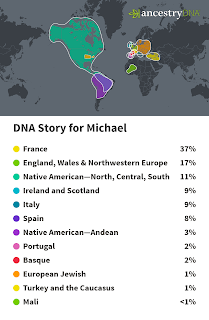 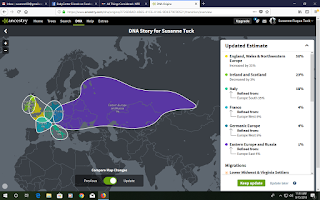 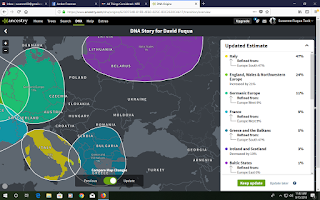 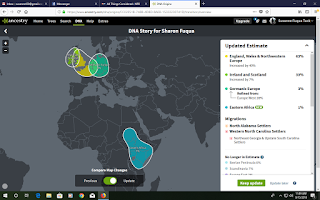 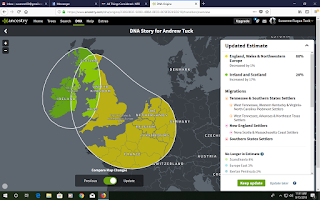 I still believe the test is accurate in matching family members because I have several on my DNA Matches whom I know personally - and we are, indeed, related.  Plus I've met several other extended family members by messaging them in the last couple of years.

But as my brother (not tested) rightly noted when I updated my close family on these new results:


Interesting info. The only thing I would be a little bit,..not miffed, but a question raised in my mind, "At what point can you put some certainty in their findings?" What if people told their friends at a certain date that they were such and such? Do they have to now give them Intermittent updates? Who's to say that in a year, "Ancestry" will update again and you'll be from a totally different region? Oh well, lol, I don't guess it really has much impact on our lives other than being interesting.

So, who knows?  I may update my DNA regions again in a couple of years to find something even different.   It's all for fun, anyway!

Stay tuned.
Posted by Susanne at 3:28 PM No comments: