The Search by Suzanne Woods Fisher -- another in the Lancaster County Secrets; it had a couple of characters from the second book, but not in a major way.  This book is about Lainey who made a "split-second decision" when just a ten year old child.  Now she has come back to the town where her choice impacted so many.  She meets up with Bertha, Jonah, and Bess Reihl, some Amish folks, and the story goes from there.

A Bride Most Begrudging by Deeanne Gist -- Did you know back in the colonial days (I'm talking the 1640s) that women from England went to the United States to marry men in order to make the men more likely to stay?  First volunteers went - widows, spinsters - but when they ran out, felons were sent. And occasionally a kidnapped young lady which is what this book is about.  You can imagine why Lady Colleen would be a most begrudging bride, eh?

A Tapestry of Secrets by Sarah Loudin Thomas -- the story of Ella an almost-thirty-year old who goes back home to help after her grandmother has a stroke.  It's also the story of Perla (the grandmother) who wants to communicate some important news, but is not able due to her stroke.

The Measure of a Lady by Deeanne Gist -- Orphaned on their way to San Francisco, siblings Rachel, Lissa, and Michael work hard to make a life in this land catering to gold miners.  Rachel must come to grips with her judgmental ways in this area of the country where things that matter back East, don't matter so much.  A good story.

Chase the Lion by Mark Batterson -- A sequel of sorts of Mark's book (the first one I read) which came out ten years ago.  He challenges and encourages and informs as is typical of him.

Waves of Mercy by Lynn Austin -- Such an interesting way to learn more about Dutch Separatists who came to the US and settled Holland, Michigan.  Two stories in one by Anna as she visits the shore of Lake Michigan to get over a broken engagement, and one by Geesje de Jonge as she writes her memoirs.  Great book!  I'm so glad I saw this on the online library catalog.

The Devoted by Suzanne Woods Fisher -- part of The Bishop's Family series which I read a couple of earlier in the year. This one picks up with Bishop David's daughter Ruthie, and also more from other regulars.  But a newcomer, Patrick, joins the crew. He's a Canadian Catholic interested in becoming Amish.

The Africans by David Lamb -- this book is so old that AIDS wasn't mentioned until the epilogue which the author wrote about five years after the first publication.  I would love to read an updated version of how things have changed for the better (I hope!) in these many countries. I enjoyed reading some of the history of Africa and about a few of the leaders who shaped it.

Beyond This Moment by Tamera Alexander -- book two in the Timber Ridge series.  I realized my library had paper copies of books 1 and 3, but book two was an audio book so I requested this one for Christmas.  I received it at our family party, and read it within two days.  I really enjoyed this story about Dr. Molly Whitcomb who leaves a professorship at a college in Georgia to teach children in a one-room schoolhouse in the Colorado territory.  What in the world?  Well, Molly comes with her secrets and reasons for fleeing her hometown.  She meets Sheriff James McPherson - who was a character in book one - and finds it difficult to keep her secrets.

Nineteen Minutes by Jodi Picoult -- A story about bullying and a school shooting, and how people do whatever they can in order to be part of the popular crowd.  Good book!

Within My Heart by Tamera Alexander -- book three in the Timber Ridge series; this one dealt with Sheriff McPherson's widowed sister, Rachel, and her struggles in raising her two son while keeping the ranch going.  Also, this has more about Dr. Rand Brookston and his efforts to prolong the lives of various characters in Timber Ridge.


Born A Crime by Trevor Noah -- I heard a brief interview with this author on an NPR program, and his story (growing up in South Africa) sounded really interesting. And someone sent it to me for Christmas even though I never requested it!  Yay for thoughtful friends!   I read it while on the way to the beach after Christmas, and enjoyed learning more about Trevor's childhood and family, and life in S.A. under apartheid.

I Heard That Song Before by Mary Higgins Clark -- I got this awhile back at a book exchange, and took it along to the beach.  A pretty good mystery about a lady who married into a filthy rich family.  Only her husband was arrested soon after their marriage for a murder that happened 22 years prior.   I finished it on the way home from the beach today (12/29) and it kept me entertained.

The Juggler's Children by Carolyn Abraham -- "a journey into family, legend and the genes that bind us."  This book was recommended to me by a blogger friend, Chiara, whom I emailed when my surprising DNA results came in a few months ago.    I was trying to think of someone with Italian roots and she came to mind!  Ha!  This was an interesting read especially if you enjoy genealogy and DNA tests and trying to solve mysteries through science and paper trails!

Happy New Year!
Posted by Susanne at 11:37 AM No comments:

Recently I was at my parents' house and found a few old pictures of my dad literally lying on the floor. Apparently he'd been looking through some things and a folder slid off a shelf or something.  Not sure how they ended up there, but I quickly rescued them, photographed them, and decided to share them here. 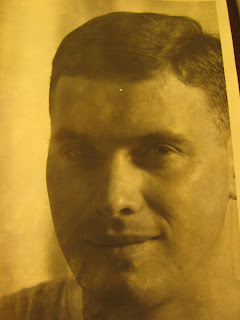 I think he told me he was about 20, and stationed in Alabama when these pictures were taken.  His USAF training and service took place in Texas, Alabama, Mississippi, and Goose Bay. 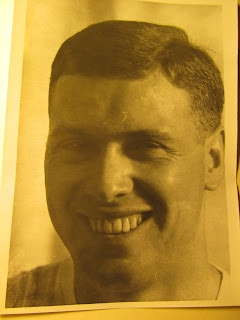 My dad grew up on a dairy farm in Caswell County in northern North Carolina.  He spent many hours working for local tobacco farmers, making a few dollars to buy school clothes and supplies.  Many of his peers were drafted into the service during the Vietnam War era so my dad joined the United States Air Force expecting he'd be drafted eventually.

Interestingly enough (to me anyway), instead of being sent overseas to fight, he was sent to Goose Bay way up in Canada.  He's mentioned tunnels in the snow as if this was definitely something that made a huge impression.   I should find out more stories about his time there.

Here is a clipping from the paper when a General visited Goose Air Base.  My dad is the one grinning. 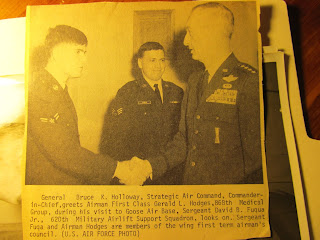 And another picture that was in that group I found recently. 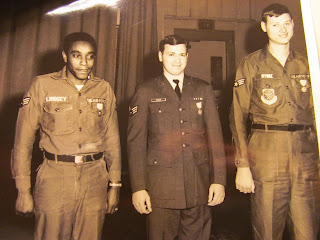